Double Trouble is the season five premiere of Full House. It originally aired on September 17, 1991.

"Michelle, go to sleep. You have a big day tomorrow." Those are the words Michelle is telling herself as she tries to get some shut-eye on the last night of summer vacation, or what's left of it. Joey comes into her room and plays the harmonica in an attempt to get her to go to sleep. But she's too excited about the first day of school and her first day of kindergarten (see both below) to get any sleep.

Jesse returns home around 3:00 a.m. from the summer tour with the Rippers, waking everyone up. An ultrasound shows that Becky is carrying twins. While that thrills Becky, the same can't be said for Jesse, who feels afraid of what is now a double responsibility that awaits him, because he does not want to mess up in any way as a father. The family helps him cope with that fear, and Jesse is happy about Becky carrying twins. Jesse and Becky have told Dr. Sinclair that they want to wait until birth to know the sex of the babies.

Meanwhile, as the new school year starts, D.J. is starting high school, and Kimmy Gibbler's outfit meets with Danny's approval (as well as the studio audience's). But when he notices D.J.'s dress, he says she looks sexy.

Stephanie is nervous about entering 4th grade, until she meets her new teacher, Mr. Lowry, who she now has a crush on and says is a "major babe".

Michelle is worried about what kindergarten will be like, as she does not know if her new classmates will like her. Joey tells her that on his first day of school, he did the Bullwinkle impression, and it worked. They laughed and instantly became his friends.

As Michelle now attends the same school as Stephanie and didn't know it would be so big and huge when they got there, she is scared and lost on her first day, so she goes to the other side of the school to pay Stephanie a visit. Stephanie takes Michelle back to her classroom, where Michelle befriends Teddy, one of her new classmates.

Back home, Comet has eaten all his dog food, and as Danny and Joey watch, he actually runs over with his dog dish and drops it into the sink. When Jesse comes home, they congratulate him on having twins, but he is still in so much shock over the news that he has visions of their "evil twins": Danny's evil twin Manny has his shirt unbuttoned almost down to his navel with necklaces in full view, and a little dirt on his face; while Joey's evil twin has hair and a voice like Joe Pesci (see Quotes). The real deals and their "twins" start arguing to the point that Jesse has to stop them, which causes the doubles to disappear, and the guys suggest he get some sleep. At first, Jesse says that he does not need sleep, but when Comet runs by with his "twin", he changes his mind and decides that a little nap would not hurt.

Later, as Michelle sits in the living room, Jesse spills the guts to her about the twins—so much so, he says that he is "apprehensive" about taking care of twins. As soon as "the word" comes out, Michelle, whom he asks to keep a secret, starts telling the whole family, which becomes a chain reaction (see Quotes).

Jesse admits that he is indeed scared of taking care of twins. He says it's easy being an uncle, but being a dad is going to be much harder with twins on the way. Becky assures him that she is also scared, but not as scared as him. Danny says that what they are going through is normal, as he too was a nervous wreck becoming a parent to three girls. Joey says that they will be great parents and the rest of the family will be there if they need them. Danny tells Jesse that for the past four years he has been "Uncle Jesse", but that will change because once the twins come to life there will be an "Uncle Danny", and he will teach them to be neat freaks. D.J. is excited to be babysitting her new cousins every day except Fridays and Saturdays, with Stephanie taking those days until she starts dating. Michelle also agrees, but on the condition that she does not change their diapers because they make her... "apprehensive". Jesse thanks the family for backing him up. Becky assures her husband that they will still make their share of mistakes, but no two kids are going to be loved more. They kiss, and then show the new baby pictures to the rest of the family.

Miss Wiltrout was played by June Lockhart, who is known for playing the mother in the TV series, Lassie and Lost in Space. Like John Stamos, Lockhart was a regular on General Hospital.

Jesse: [enters the back door] Hey, everybody, I’m home! Hey, Comet! It’s your Uncle J! [The dog just looks at him.] Please, don’t get up. Hey! [goes upstairs] Wake up! Everyone, wake up! I’m home! [They all meet him in the hallway.] Hey girls, I missed you [hugs and kisses the older girls].
D.J.: [groggily] Hi [goes back to bed].
Jesse: Hey, Joseph. Hey, Michelle! Hey! [picks her up and kisses her]
Danny: Hey. It’s 3 AM. School starts tomorrow. You’re making lunches. Welcome back [goes back to his room].
Jesse: [now alone again in the hall] That’s it? I’ve been on tour all summer and that’s all I get?
Michelle: [comes back out of her room] Next time, come home earlier.

Kimmy: [enters the back door] ¡Hola, Deej! Big Dan.
Danny: Hi, Kimmy. You look nice today [When he turns to speak to D.J., Kimmy changes her look]. [to D.J.] I know it might seem weird for me to say this but, uh, I think right now you could actually learn a lesson from Kimmy [turns back to Kimmy and does a double-take at what he sees].

[As everyone takes Michelle to school, they show what awaits her: the huge building.]
Danny: Well, girls, here we are.
Michelle: This is my school? It's so big!
Joey: Well, you're a big girl now, Michelle.
Michelle: I'm not that big.
Danny: Michelle, you're gonna be fine. But if you need any help, your big sister's right in the same school. Right, Steph?
Stephanie: Don't worry, Michelle. Kindergarten is just like preschool, only without the naps.
Michelle: Too bad. I'm good at naps.

Jesse: All right. Let me help you down here. We'll just sit.
Becky: Now, remember, we don't wanna know if it's a boy or a girl, okay?
Jesse: Okay. All right, yes, I understand.
Dr. Sinclair: This is an interesting sonogram. Boy...
Jesse: It's a boy! We'll name him... We'll name him Jesse Junior. How's his hair? Does he need mousse?
Dr. Sinclair: I'm not saying it's a boy.
Jesse: Oh, then it's a girl. Jessica Junior. She's not dating until she's 35.
Dr. Sinclair: I-I didn't say it was a girl.
Jesse: What's left?
Becky: All we wanna know is if the baby is healthy.
Dr. Sinclair: Relax. You don't smoke, and you don't drink. You're doing everything just right. The babies will be just fine.
Becky: See that, Jess? The babies will be just fine. Now, let's go.
Jesse: Did you say "babies"?
Becky: Did she say "babies"?
Dr. Sinclair: That's what I said. You're having twins.
Becky: (laughs) Who's having twins?
Dr. Sinclair: You are. Congratulations.
Becky: Jess, we're having twins! Oh, honey.
Jesse: Twins, I... just wanted to know if it was a boy or a girl.

Jesse: My head's just kind of jammed. I mean, having a baby is great. But having twins?
Danny: Twins are gonna be twice is great. Twice the love, twice the hugs, twice the kisses.
["Manny" materializes from Danny's body (in Jesse's mind).]
Manny: It's not that simple, Jesse boy. Twins are twice the feeding, twice the crying, twice the diapers, and twice the responsibility [laughs].
Danny: Who are you?
Manny: I'm your evil twin, Manny Tanner.
Danny: You need a shower, Manny. Jess, twins will mean twice the "I love you, daddy"'s.
Manny: You live in a bubble, you Lysol-loving hug freak! [laughs].
Jesse: I'm cracking up here.
Joey: Come on, Jess. You're gonna make a great father.
[Joey's (unnamed) evil twin appears next to him.]
Joey's evil twin: What do you know? You're 33 years old and you still wear Scooby-Doo pajamas.
Joey: Just the bottoms. And I suppose you're my evil twin?
Joey's evil twin: Yeah. What was your first clue, Sherlock?
Joey: Well, you look a lot like me.
Joey's evil twin: Hey, Jess. You can kiss your rock n' roll days goodbye. You won't look so cool with a twin on each shoulder and a spit-up rag on each arm.

Joey and his (unnamed) evil twin 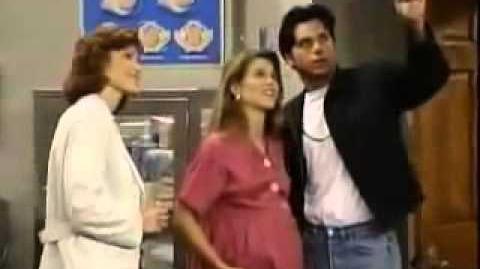 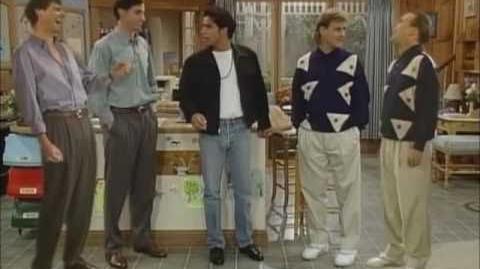