Full House is an American television sitcom that aired from September 22, 1987 to May 23, 1995, on ABC. It has a total of 192 episodes in 8 seasons. The series was created by Jeff Franklin and executive produced by Franklin, along with Thomas L. Miller and Robert L. Boyett. It was videotaped live before a studio audience at the Lorimar Studios in Los Angeles.

Before the beginning of the series, news anchorman Danny Tanner married Pam Katsopolis, and they had three daughters: D.J. (Donna Jo), Stephanie, and Michelle. After Pam is tragically killed in a car accident caused by a drunk driver, Danny soon realizes he needs help in raising his daughters. He recruits his brother-in-law, Jesse Katsopolis – a rock musician and a motorcycle guy – as well as his best friend, Joey Gladstone – a comedian who does impressions – to move in and help him provide a stable home. The girls must then adjust to having two more men in the house (basically like three dads). In season two, Danny is reassigned from his duties as sports anchor by his television station to become co-host of a local morning show, Wake Up, San Francisco, and is teamed up with Nebraska native Rebecca "Becky" Donaldson. Jesse and Becky eventually fall in love, and get married in season four. In season five, Becky gives birth to twin sons, Nicky and Alex, bringing the total to nine family members living in the house in San Francisco, with the combination of the Tanners and the Katsopolises. The family dog, a golden retriever named Comet joins the show in the season three episode "And They Call It Puppy Love" after his mother, Minnie gives birth to a litter of puppies on Jesse's bed and the girls are allowed to keep one of them.

While the setting was in San Francisco, the show was taped at Lorimar Studios from 1987 to 1993, and Warner Bros. Studios from 1993 to 1995 (both in Burbank), and the soccer scene that was featured in the opening credits of the first three seasons was taped at Griffith Park in Los Angeles.[2] Re-recording locations were Columbia Studios, Lorimar Studios, Larson Sound Center, and Sony Pictures Studios (in Culver City; the former home of Lorimar-Telepictures).

The show has been a hit in several countries around the globe as well. While the only elements intact are the theme song as well as the show's logo, when the latter appears, it's announced in the country's tongue. However, some countries have their own titles for the show; the only country to not have its own title for the show or have it announced in the country's tongue is Germany.

In some countries (such as Czech Republic), instead of announcing the actor's name, they announce the voiceover's name for each character.[10]

In Japan, the English logo is shown with the Japanese logo in all appearances. The logo itself zooms towards the viewers in the opening, the opening credits each have the actor's name in Japanese and English, have their Japanese character name (D.J. excluded) in a speech bubble of the character's color (blue for male, pink for female), their scenes are encased in a box on a greenish background, and Don Van Atta's credit and Jeff Franklin's creator credit are excluded (as are Dennis Rinsler's and Marc Warren's EP credits in the final 3 seasons). The closing credits are also featured on a greenish background, indicate the voice-overs for each character, and feature stills from the episode.[11][12]

Spanish-speaking versions have only D.J.'s name pronounced in the native tongue.

Countries that have aired the show are listed below.

The show was originally going to be called House of Comics because it was planned to be about three comics living together. Jeff Franklin decided to shift the theme because family sitcoms were so popular at the time.

The title of the show is a double entendre meaning a poker hand consisting of a pair and three of a kind, and the literal use of the term. For example, Jesse and Rebecca and their twins are each considered the "pair"s, while Danny, Joey, and Jesse, and the three Tanner girls are each considered the "three of a kind"s. In fact, it has been referenced on the quiz show Jeopardy! twice: In a December 1992 game, the show's name was a category in a poker-themed Jeopardy! round[13] (the $100 clue mistakenly says that Alcatraz can be seen in the opening credits; however, this is not true as it was never seen in any of the early seasons), and in a later appearance, was the correct response to a May 2017 Jeopardy! clue in the Double Jeopardy! category of "Also a Classic TV Title". The clue was: "3 aces, 2 jacks".[14]

Of all the Miller-Boyett shows, this was the only one to not use Panavision cameras for taping, giving the impression the show was done live (usually shows that use Panavision cameras give disclaimers in the copyright and mention the word 'filmed' instead of 'taped'; Family Matters, Perfect Strangers, Going Places and Step by Step all used them).

While the kids attended their regular schools when the show was airing, they also attended "school" on-set. Should the show be taping, their assignments were sent to the set, and tutors were available for each of them.

"One To One – Feel Good About Yourself"

In season two, during ABC's Saturday morning cartoons, a series of PSA's were created featuring cast members of Full House and its "sister" show at the time, Perfect Strangers. In the former's case, three of these were created: "Making Mistakes", where Stephanie accidentally knocks over a basket of laundry that she and Danny just folded, so Danny helps her learn from this mistake by having them start over;[15][16] "Be Proud", where D.J. comes home from school feeling rejected after Kathy Santoni made the junior high cheerleading squad and she did not, and Jesse and Joey get her to be proud of the fact that she is good at other things such as karate, soccer, and being a straight-A student;[17][18] and "Sharing", where D.J and Stephanie learn how to share a piece of cake, but Danny recommends they not do it in front of Michelle.[19][20][21][22][23]

Each of the eight seasons was released on DVD from Warner Home Video, four discs in each set (covers can be found on each season's page); all 32 are also in a Complete Series set that is packaged in a replica of the Tanner house; there are two types: one with the roof and one without; the one with the roof allows the roof to be removed and the box opened from the side, and the one without the roof is the cover for the entire box, allowing it to be removed to reveal the discs inside.[24]

Released during season six, Tiger Electronics made a board game based on the show, with a picture of the Tanner girls playing the game on the front of the box (right) and a picture of the game and its contents on the back, as well as photos of the girls with and without Danny, and the twins with and without Becky and Jesse. There are six "characters" in the game instead of nine; Becky and the twins are considered as one character, and Joey plays a separate character via Joke Cards; drawing one of these and reading his joke awards the player another turn. As the back of the box suggests, Joey is practicing his comedy routine but nobody is there to listen, thus the object of the game is to pick up the six other characters from various neighborhoods and locations and get them all home to their own neighborhood in time for them to listen.[25][26][27][28] Unlike most dice games that don't require exact rolls to reach destinations, the game makes two exceptions: Taking the Taxi to the Mall and/or taking the Cable Car to the Park both require exact rolls.

Tiger Electronics also made a handheld game based on the show, with the player playing as Michelle. Basically, the player scores every time Michelle high-fives people, and the player must dodge everything she encounters, as everything in the Tanner house comes to life, and all of this must be done within a certain time limit. Once time ends for a particular level, the player advances to the next level.

Like many action games, if Michelle is hit, a life is lost, and when all lives are lost, the game ends.

The game's label features Michelle, Stephanie, and D.J. on the left, and Michelle alone on the right.

Tiger Electronics also made dolls based on the characters of the show. The following were made: Rockin' Jesse, Jesse's Family, and Danny's Family. Meritus made a 15-inch talking version of Michelle which includes all of her catchphrases.[29]

Several paperback books were published featuring FH characters: Michelle (40; becoming Michelle and Friends towards 1999's end)[30] and Stephanie (33)[31] individually, and a few focus on the two together (14).[32] They were written by various authors between 1993 and 2001 (based on events that could've occurred and featuring characters that could've appeared had the show not been axed). There is also a Club Stephanie series (15), which focuses on Stephanie and a club of mean girls called "The Flamingoes". The Michelle series also contains three activity books: My Super Sleepover Book (1997), My Awesome Holiday Friendship Book (1998), and My Year of Fun Book (2000). In addition, there was a Dear Michelle series (4), which revolves around Michelle as a advice columnist for her school newspaper (all published in 2003, but with the events taking place around season 8).

There was also D.J.'s Family Scrapbook (1992, during season 6 taping), Jesse's Snapshot Album (1993), a flip-over book based on D.J. and Stephanie (with Stephanie's observations on one side and D.J.'s opinions on the other), a Paper Doll book for all three Tanner girls from Golden Books, and much more. An unauthorized book from Modern Publishing (1992, also during season 6 taping) was also published, and despite being "unauthorized", the book's info regarding the show, actors, and characters is legit (unlike the Lifetime TV special, below).

Four books were also published, based on episodes from the show[33]:

In 1991, around season four, Laffs created a set of trading cards based on the series. The cards themselves feature each of the cast members, their characters (individually and in groups), and even scenes from certain episodes.

They are packaged six to a set, and the other four cards in each set consist of two from their "sister" shows, Family Matters and Perfect Strangers.

Also around season four, there was official clothing and miscellaneous items based on the show, including a water bottle, black sweatshirt, pink two-piece sweatsuit, and a replica of Michelle's plush pig. There were even mugs with the show's logo that were actually used on the show itself, as well as an "I <3 Jesse" T-shirt.[34][35]

In August 2015, a made-for-TV movie titled The Unauthorized Full House Story aired on Lifetime.[36] It is an unofficial behind-the-scenes drama about the show.[37] It is "unauthorized" because it was not approved by the producers and much of it is based on rumors. Candace Cameron Bure and Andrea Barber both criticized the documentary. However, John Stamos gave a supportive tweet to the actor portraying him.[38]

In February 2016, Fuller House premiered on Netflix. This series focuses on the combined families of D.J., Stephanie, and Kimmy in a gender-reversed version of the Full House plot. This time there is a widowed mother, her sister, and a female friend raising three boys (and a girl) rather than a widowed father, his brother-in-law, and a male friend raising three girls.

Full House: Tournament Fighter was a prototype for a fighting game (based off of Street Fighter II: Tournament Fighter) that does not really exist, nor is it even canon. It was featured in a AVGN episode where he plays "Shaq Fu" and he compares it to this fake game. 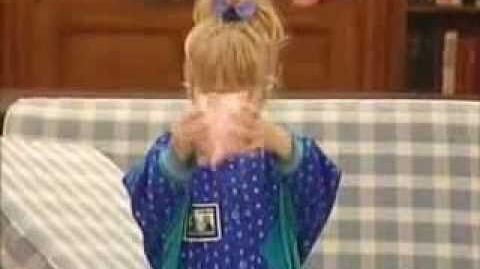 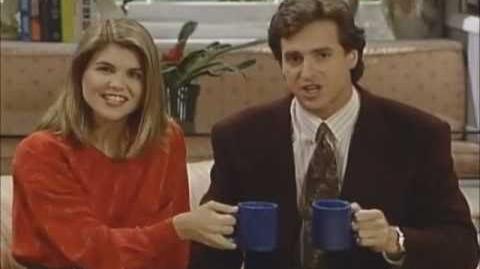 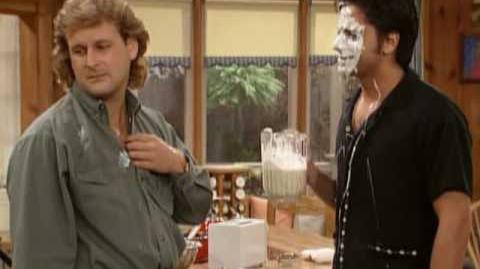 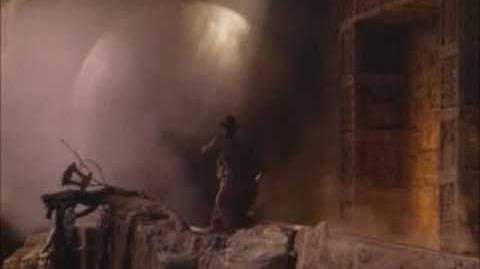 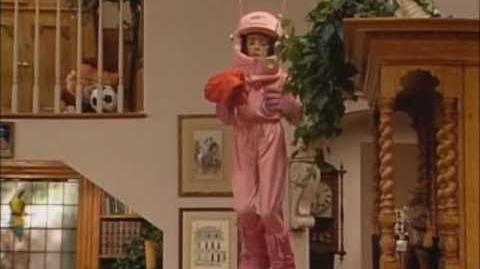 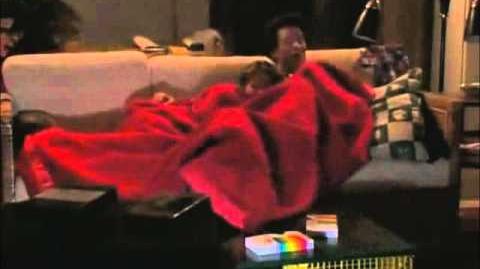 Did You Know TGIF Is One Big Shared Universe? Have Mercy! (DECIDER • SEPTEMBER 2017)

Retrieved from "https://fullhouse.fandom.com/wiki/Full_House?oldid=48825"
Community content is available under CC-BY-SA unless otherwise noted.