Start a Wiki
watch 01:25
Overview: Fuller House
Do you like this video?

For the Full House episode of the same name, see Fuller House (episode).

Fuller House is the Netflix original series that is a sequel to Full House.

Twenty-one years have passed and the Tanner Clan are within their final days before parting their home permanently. Danny has since remarried and is preparing to move. He and Rebecca have gotten a new job offer to work in LA to start a new morning show, Wake Up, USA. Uncle Jesse heads to LA to be with Becky as well as start a new musical job, Nicky & Alex (the twins) are now in college with a focus on operating a food truck taco business, Joey has gotten a job as a live comedian act in Las Vegas and married with four kids, Stephanie has a successful DJ career, taking her sister's name as "DJ Tanner," and Michelle is out in New York focusing on her fashion career (much to the family's chagrin). With the entire family taking major directions away from their house, Danny has opted to sell their home, ending the Tanner Household. However, fate would change with D.J.

D.J. became a veterinarian and started a family with her husband, Tommy Fuller (a firefighter). Together, they have three boys: Jackson, Max, and Tommy Junior. Unfortunately, Tommy died in the line of duty a year earlier and D.J. has been taking refuge back at the Tanner House until she can figure things out. Too proud to admit she is struggling to find stability and balance within her life, she admitted her troubles to her baby and the family overheard her real feelings on the baby monitor and decided to help her; the house now belongs to D.J. and the Fuller boys, making it the Fuller House.

In between, Kimmy Gibbler got married to Spanish car racer, Fernando, and the two have a daughter together, Ramona. Unfortunately, Fernando wasn't a loyal husband and Kimmy has caught him cheating on her multiple times, prompting her to divorce him. However, despite the multiple infidelities, Kimmy still has feelings for Fernando and he tries hard to win back Kimmy's feelings.

When the entire clan heard of D.J.'s plight, the entire family suddenly volunteered to stay behind to help D.J., but D.J. herself couldn't allow the entire clan to make such a sacrifice for her. However, Stephanie had no major obligations and decided to put her DJ career on hold to help D.J. manage the house. Shortly after, Kimmy Gibber and Ramona also moved together with the Fuller family as additional support.

Life would get interesting for D.J. when she meets Matt at the vet and her ex, Steve. Both men are single and interested in her and both are vying for her affection. D.J. herself has been undecided as she likes both men. Although it created a rift, the men agreed to give D.J. the time she needs to make a final decision.

As for Stephanie, despite having a party girl lifestyle, she ultimately learned she wanted more stability and helped D.J. out with the boys. Because of Tommy's death, she never had the chance to tell D.J. and the family that she discovered she's incapable of having children. Struggling with the idea of never able to have a family of her own, Stephanie takes some comfort that she's helping D.J. raise the Fuller boys as she attempts to find someone herself.

The story ends with Uncle Jesse and Aunt Becky coming back into town to renew their vows. Kimmy and Fernando recently got back together and Fernando promises to make things different; the two are doing a double-wedding with Jesse and Becky with Joey as the presider. With Kimmy back with Fernando, it would mean Ramona and Kimmy would leave to be with Fernando in his career on the racing circuit. However, in the final moments, Kimmy realizes her being with the girls and the life she has built means a lot greater than following Fernando's career; the two agreed to remain engaged, but not re-married until they can sort out the details. As for D.J., she couldn't make a final decision between Steve and Matt; D.J. realizes she's still not ready for a relationship and decided to put things off with the both of them. Kimmy, Stephanie, and D.J. celebrate as the ladies are still together.

Eight weeks have passed and summer is about to end. The Fuller house has since experienced mundanity with everyone exploring their summer plans. However, with everyone coming back together to resume their lives, new chapters unfold with the Fuller household.

During that time, D.J. took time off from dating as she needed personal time to sort out her feelings. She encouraged both Steve and Matt to move on with their lives as she was not sure who to choose and did not want to leave the men hanging for her; she has since made a choice, but before she can declare her decision to anyone, the men have since found new girlfriends.

The guys become best of friends and realize that without D.J., they need to find new partners. Matt hooks up with Krystal (an energetic athlete) and Steve hooks up a medical doctor, C.J. (a person that closely matches D.J. in every characteristic, an obvious surrogate to help fill in the void). With both men out of the picture, D.J. feels alone and Stephanie and Kimmy would help (with little success) her find a new partner in life.

In between, Fernando lost his home and Kimmy convinced the girls to allow him to stay with them until he could find a new home (much to everyone's disapproval). Kimmy and Fernando remain engaged and continue to sort out their lives together while trying to raise Ramona, as well as trying to develop a career in dancing and interested in dating boys. However, Ramona's first romantic encounter does not fair well, but Kimmy, D.J., and Stephanie help her recover as the three ladies' own first budding romances were not as great, but believed in better endings in future endeavors.

Meanwhile, Jackson continues to have strong romantic feelings for Lola, but her feelings for him have since died after summer; he is back to square one. Because he is determined to win Lola's heart, he makes every effort to impress her and becomes reckless, from pulling stunts to attempting to join the football team, hoping Lola would look at his way. However, D.J. is resistant with all of Jackson's attempts, as he puts himself in danger and D.J.'s motherly concern has made Jackson rebellious and contentious. Realizing Jackson would never fully listen to D.J., Kimmy convinces Lola to help convince Jackson to abandon football and he looks for other ways to impress Lola.

Due to a long-term project about making the world better, Max has been struggling to find a way to complete his project while learning to be more conscientious to the planet. In his own quest to complete his assignment, he has made the effort to avoid eating meat and has since raised four live chickens in the backyard. As the person who managed to get entangled in the affairs of others, Max often exposes the true nature of a situation to the adults.

As for Stephanie, she unexpectedly develops a romantic relationship with Kimmy's little brother, Jimmy, a professional photographer for National Geographic. While at first attracted to Jimmy, she quickly becomes resistant when she realizes she kissed a Gibbler. However, as time passes, the two can't deny a strong mutual attraction and Stephanie agrees to try things out.

In late 2014, John Stamos began spearheading the effort to bring the show back on Netflix. Many rumors began spreading – until finally on April 20, 2015, Stamos on Jimmy Kimmel Live, confirmed that the spin-off had been green-lighted by Netflix. It was confirmed on July 16, 2015 that the first episode of the series would be titled "Our Very First Show, Again" – a nod to the title of the Full House premiere episode: "Our Very First Show".

On April 22, 2015, in an interview with Women's Wear Daily, Mary-Kate Olsen mentioned that she and her sister had "just found out about it" and that they intended to contact the show's creators to "see what’s happening". Ashley said she planned to call their former TV father, Bob Saget, to "get his perspective".[1] On July 28, 2015 Netflix chief content officer Ted Sarandos reported that the Olsen twins were teetering on their decision to reprise their role.[2] In October 2015, it was confirmed that Mary-Kate and Ashley Olsen would not be reprising their role as Michelle Tanner. On Andy Cohen's SiriusXM talk show "Radio Andy," John Stamos confirmed that younger Olsen sister Elizabeth's interest in taking over the role had been explored. "I don't think this has been talked about, " Stamos said, adding "I didn't do it, I think Jeff Franklin did. I said, 'Call the sister. Ask her.' We talked to her agent and her agent was like, 'Come on, she's not going to do that,' but we did call her agent."[3]

Michelle is mentioned a couple times in season one: first in the premiere episode when Stephanie asks where her little sister is, Danny tells her "Well, Michelle sends her love, but she's busy in New York running her fashion empire." – at which time, the cast breaks the "fourth wall," turning to look into the camera with a knowing smirk for several seconds. In "Ramona's Not-So-Epic Party", Ramona explains that her dress is an Elizabeth & James by Mary-Kate and Ashley Olsen. Kimmy then looks at the receipt of the dress and says, "At these prices, no wonder they don't need to act anymore!" Another time, D.J., Stephanie, and Kimmy return home at 2:00 am after Kimmy's bachelorette party and call Michelle on Stephanie's cell phone. They only get her voicemail, but proceed to leave a message including some of Michelle's better-known phrases.

In the episode "Fuller Thanksgiving" in season two, similar to the premiere, in response to D.J. saying that she hopes that Michelle will be home next year, Jesse breaks the fourth wall and says to the camera, "Come on, it'll be fun."

In February 2018, creator and executive producer Jeff Franklin was fired after allegations of Franklin’s behavior in the writers’ room which ranged from being verbally abusive to staffers and making sexually charged comments about his personal relationships. Although not accused of directly sexually harassing or engaging in physical misconduct with any staffers, Franklin was replaced with Steve Baldikoski and Bryan Behar, both of whom have co-executive-produced Fuller House since its 2016 debut.[4] 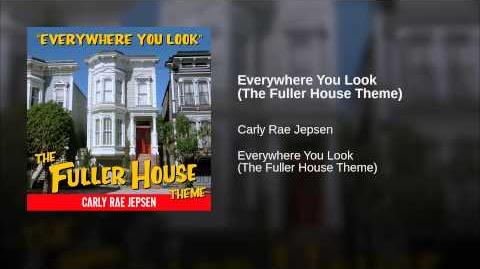 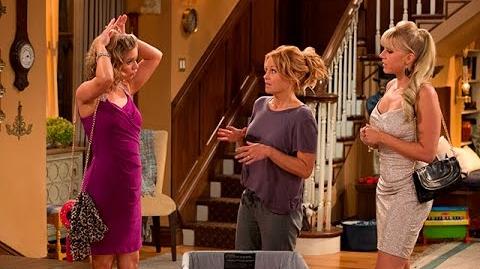 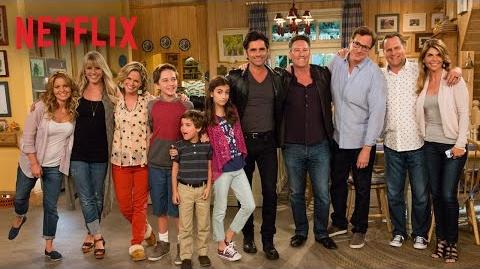 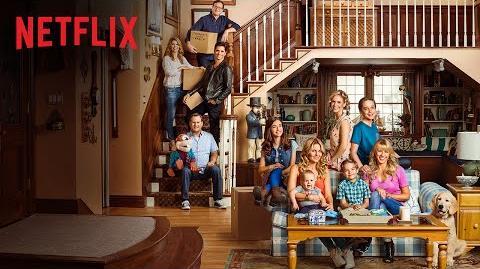 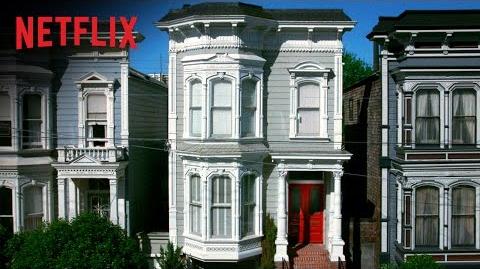 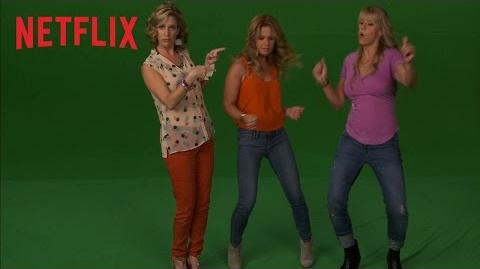 Retrieved from "https://fullhouse.fandom.com/wiki/Fuller_House?oldid=48980"
Community content is available under CC-BY-SA unless otherwise noted.