View source
watch 02:14
Who is Jackson Fuller?
Do you like this video?
Play Sound

Jackson is the eldest son of D.J. Tanner-Fuller and the late Tommy Fuller, Sr.

Like his brother, Max, Jackson is also very bright. He sees right through most of his mother's sneaky behavior when she’s trying to 'butter him up' to soften the blow of bad news. In "The Not-So-Great Escape", he displays a proficiency in chemistry as he confidently mixes up a solution that will cause smoke, and set off the sprinkler system and fire alarm in science class, however he receives a D- in his History class and must bring the grade up in summer school. He also displays a certain level of compassion, as this act is meant to be a distraction for Ramona's escape attempt whom he is helping even though he doesn’t particularly like her. Jackson is interested in motorcycles, as he questions Jesse about his motorcycle experiences as a child, and expresses his frustration over not being allowed to have one of his own.

Jackson has a crush on Ramona's best friend Lola, but for the most part has enjoyed only limited success in cultivating a relationship with her. Before Ramona and Lola became friends, he barely existed in her eyes, and after the incident in science class, Lola remembers him as the one who ruined her volcano project by setting off the sprinkler system. After buying her a signed Giants jersey in "A Giant Leap", and dancing "next to" her in "Ramona's Not-So-Epic Party", things seemed to be looking up for him. In the season one finale, "Love is in the Air", when Jackson requests a goodbye hug, Lola opts instead for a kiss. While hardly more than a simple peck on the lips, this is Jackson's first kiss.

Ramona has a history of antagonizing Jackson, which dates back at least as far as his 6th birthday. In "Our Very First Show, Again", he recounts how she ruined his cowboy party stating, "She blew out my candles, she stole my wish which was for her to leave. And then when she did leave, she rode away on the pony ride pony." To a certain extent, Ramona is something of an arch rival in his eyes. The feeling which was only further solidified when she moved into his room, forcing him to have to share a room with Max, just like D.J. was forced to share a room with Stephanie when their mother died and her Uncle Jesse and Joey moved in. However, in "Love is in the Air", Ramona helps Jackson with his crush, Lola, and at the end of the episode, he is very grateful and seems open to being friends. In season two, Jackson helps Ramona, when Bobby Popko posts a horrible video of her.

Bobby is Jackson's best friend. Their friendship is similar to D.J. and Kimmy's friendship. In this case, however, Bobby actually creates dangerous situations for the boys, whereas Kimmy is mostly seen as weird, annoying, rude and clueless. Bobby also gets along with Jackson's younger brother Max, while Kimmy never got along with Stephanie when they were kids (although exchanging quips with each other was something they expected).

D.J. doesn't approve of Bobby, as she views him to be disrespectful and a bad influence on Jackson, since Bobby encourages disobedience, deceitfulness and dangerous activities. When D.J. tells Jackson: "Stay away from that Popko kid. There's something not right with him." Jackson defends their friendship by telling D.J.: "Mom, he's my best friend. He's my Kimmy Gibbler."

Jackson is punished by not being allowed to go to Lucha Kaboom after he goes over to Bobby's house after D.J. banned him and Max from going over there, it is Bobby who devises a plan to subvert the tracking app D.J. uses so his friend can attend anyway.

Rocki and Jackson first met at summer school. They are classmates and they study in the same study group. Jackson tends to get nervous around Rocki because of the way she responds to anything he says or does. They shared three kisses. Jackson asked her to be his girlfriend, which she declined because she does not like being labeled. Instead, they both agreed that they would be friends. In season four, however, Rocki became Jackson’s girlfriend until she heard him talking bad about her; she became very upset and didn’t talk to him. In the season four’s finale, she holds his hand, leaving a hopeful Jackson that they still might be boyfriend-girlfriend. In season five’s premiere, Jackson asked if Rocki holding his hand meant anything but she said that she didn’t think of it as anything special. When she asked why he asked her that question, he lied saying that he just wanted to make sure she didn’t think of it as anything special. Jackson was confused whether he and Rocki broke up or not and Rocki only makes it more confusing. At the end, Rocki forgives Jackson and they get back together. 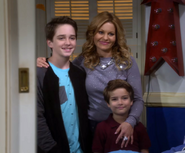 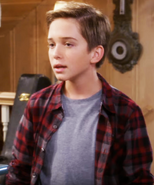 Jackson's interests include bicycling and a number of board sports, indicated by the posters and items he keeps above his bed and on his side of the boys' room.
Community content is available under CC-BY-SA unless otherwise noted.
Advertisement