Lori Anne Loughlin (pronounced: LOCK-lin) is an American actress who played the role of Rebecca Donaldson-Katsopolis in Full House and in Fuller House (with guest-starring appearances). She also starred in the spin-off series 90210, and the Hallmark family drama series When Calls the Heart.

She began her career at age 12 as a print model. During her early teen years, she appeared in television commercials and was frequently seen in national print ads like the Sears catalog and Bradlees weekly flyers. In 1979, she received her first recognizable national television exposure playing a cheerleader with a cast on her leg in a Tab Cola commercial.

At the age of 15, Loughlin was cast on ABC's soap opera The Edge of Night, playing the part of Jody Travis, an aspiring dancer. In 1982, she and The Edge of Night competed against other ABC daytime soaps (Ryan's Hope, All My Children, One Life to Live, and General Hospital) on Family Feud.[1]

After three-and-a-half years, prompted by the urging of Joel Crothers, Loughlin decided to try her luck in feature films and television. She came back to ABC when she was cast on the sitcom Full House playing the role of Rebecca Donaldson, who was Danny Tanner's co-host from work and Jesse Katsopolis's love interest. Her character went from recurring to regular as Rebecca and Jesse married on the show, and this would be her most notable role to date.

In 1992, she had a cameo role in the Mary-Kate & Ashley Olsen TV movie To Grandmother's House We Go, playing the hostess of the Win-O-Lotto game show.

In 1993, she starred in the TV movie A Stranger in the Mirror (based on Sidney Sheldon's best-seller), playing Jill Castle, a young woman who goes to Hollywood with dreams of making it big, only to be drugged and raped during a shoot. In a split-screen, she does a promo during the end credits of "Smash Club: The Next Generation"[2]

After Full House, she starred alongside Bruce Campbell in In the Line of Duty: Blaze of Glory, which was released in 1997. In 2000, Loughlin co-starred opposite Treat Williams in the Fred Olen Ray-helmed thriller Critical Mass.

She also made cameos on other sitcoms including Spin City, Seinfeld, and The Drew Carey Show. She also played the superhero Black Canary in the short-lived Birds of Prey series.

From 2004 to 2005, Loughlin co-created, produced and starred in the WB drama series Summerland. She played Ava, the aunt who raises three children after their parents die in a car accident. The series was canceled due to low ratings on July 11, 2005.

Loughlin was in attendance at Comedy Central's The Roast of Bob Saget, which was hosted by John Stamos and premiered on August 17, 2008. At her table were Full House co-stars Dave Coulier and Jodie Sweetin.

In 2013, she began working with Hallmark Channel as the lead role in the Garage Sale Mystery film series, then the following year, starring in the drama series When Calls the Heart as Abigail Stanton (2014–2019).

In March 2019, Hallmark Channel severed ties with Loughlin after she was arrested in the college admissions bribery scandal. The following day, it was reported that she would not be appearing in season five of Fuller House.[3]

In May 2020, Loughlin pleaded guilty to conspiracy to commit wire and mail fraud. In August 2020, she was sentenced to two months in prison, two years of supervised release, a $250,000 fine and 250 hours of community service (her husband was sentenced to five months in prison).[4] In November 2020, it was announced she would be released in time to celebrate Christmas.[5] 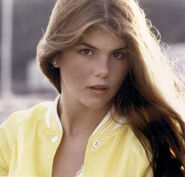 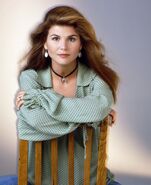 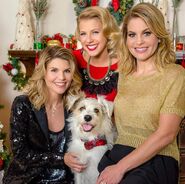