John Brotherton
Matthew Harmon DVM is a recurring character on the Netflix series, Fuller House. He is portrayed by John Brotherton.

Matt is the son of D.J.'s retired boss, Fred Harmon. He is a veterinarian, like his father and D.J., who lived in Miami, FL prior to Fuller House where he ran his own veterinary clinic. Along with D.J., he is the co-owner of Harmon-Fuller Pet Care, the newly renamed clinic his father owned before retiring.

Matt is Steve Hale's rival as they both want to date D.J. In the season one finale, D.J. refuses to choose between them and explains that she's not ready to start dating again. The guys are disappointed but accept it, and they end up becoming friends as well.

Matthew, accepting that fact that D.J. is not ready to date, takes it upon himself to get a girlfriend, a very cheerful and athletic woman. Eventually he reveals that he broke up with her and admits that he still has feelings for D.J., and they become a couple. 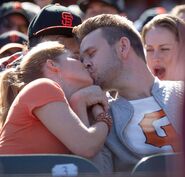 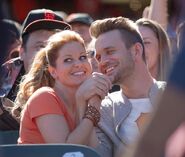 Add a photo to this gallery
Retrieved from "https://fullhouse.fandom.com/wiki/Matt_Harmon?oldid=48544"
Community content is available under CC-BY-SA unless otherwise noted.