View source
watch 02:02
Who is Ramona Gibbler?
Do you like this video?
Play Sound

Ramona is the daughter of Kimmy Gibbler and Fernando Guerrero. She is 12 years old at the beginning of season 1 of Fuller House, and has her 13th birthday party in the episode "Ramona's Not-So-Epic Party".

Being "half Gibbler," Ramona displays some of the odd quirks her mother is known for. Additionally, she is fluent in Spanish, having learned the language from her Argentinian father, Fernando.

Lola is the first friend Ramona made at Van Atta Middle School (thanks to Jackson's antics and her attempt to ditch school), and she is the first of Ramona's friends to visit the Tanner House. She appears to be growing into a best friend role, much the way Kimmy was to D.J. on Full House.

Her enemy turned best friend. He helps her out, as shown when Bobby Popko makes her the hippo. It is also said that the two are almost like brother and sister, as they squabble and look out for each over as siblings would.

Bobby Popko was Ramona's first kiss. She thought he was her date during a movie night but then he brought someone else. In another episode, they broke up and Popko asks out Ramona, but she rejects him. After that, he makes a video of Ramona as a dancing hippo for revenge, and thinks Jackson did it, before she finds out it was Popko. They do eventually start dating for real until she dumps him for wanting to see other girls.

Ethan was delivering for Postmates and he and Ramona fell in love at first sight. Fernando forbid them from seeing each other at first, but then reluctantly started letting them date. 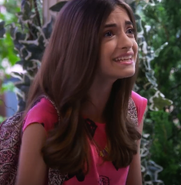 From The Not-So-Great Escape (2016)
Community content is available under CC-BY-SA unless otherwise noted.
Advertisement