Smash Club: The Next Generation is episode six in season seven of Full House. It originally aired on October 19, 1993.

Outside in the backyard, Stephanie and Michelle are lying down on the lawn and looking at clouds in the sky, trying to figure out what shapes the clouds are in.

Becky and Danny preview their upcoming Wake Up, San Francisco episode, which features a sumo wrestler. In fact, Becky surprises Danny in that he will be going up against the big guy. She says that the 700-lb. guy will be flinging Danny's flab, but Danny says that he has no flab, and even if he did, he would not want to be flung around by any guy weighing 700 lbs. or more.

Then, Joey and Jesse come in and say that they probably missed out on a very interesting conversation, but they've got one of their own. Jesse is shocked and excited when he discovers he has inherited The Smash Club from the late Buzz Markel, according to his will. Jesse and the Rippers played gigs at the Smash Club more than virtually any other band. However, the place has been closed down for the past couple of years. Jesse will become the owner only if he can reopen the club. If he can't do it, the club will be demolished and turned into a parking lot.

Later, Stephanie, D.J., Steve and Kimmy come home from school ready for the weekend. They all ask if they have big plans, and they do not – until Steve suggests that they go to the mall. However, D.J. says that she has been to the mall so much that her hair smells like Orange Julius.

And even though the four of them have never heard of such bands as The Mamas and the Papas, Sonny and Cher, or even Jefferson Airplane, Jesse decides to reopen the Smash Club as a place where anyone can come to hear cool new music from new bands, no age limit (like the Smash Club had before – when people had to be 21 or older to get in), no alcoholic beverages, a good dance floor, and even good food.

Back home, when Danny receives the outfit for the sumo segment on the upcoming Wake Up, San Francisco, he finds it to be too small for him. In fact, when they arrive home later, he complains of the pain he got from the wrestler. Becky opens the fridge and finds they're out of ice packs, so he'll have to substitute either a box of waffles, a carton of Rocky Road ice cream, or a rump roast. Danny takes the rump roast, and Becky suggests they eat out tonight.

Meanwhile, Michelle tries to turn Nicky and Alex into her own personal servants. Outside, as she rests, she asks them to get her some fruit to eat, and some water so she can quench her thirst. They call her "Mean Michelle" (similar to calling Jesse "Mean Daddy" in "Tough Love"), and grant her her wish. Unfortunately, the water she gets is from the hose, and it is enough to not only soak her but also to wake her from her nap! And even worse, she says they cleaned her room wrong and got her the wrong fruit (a nectarine instead of a peach) and brushed her hair wrong, much to the shock of Becky and Danny (as well as the studio audience). Becky tells the boys that what they did was not nice. Danny, with the roast "ice pack" on his back, helps Michelle realize that Nicky and Alex are also people, and they too should be treated with respect. She questions if that is what it sounds like and then says that maybe she said it wrong; however, the grown-ups confirmed what happened is indeed a result of her actions. She apologizes for turning them into their slaves, Nicky and Alex accept her apology, and their bond becomes even stronger (as the audience gives an "aw").

Jesse and Joey head to the Smash Club, which is a mess. Jesse wants to clean up the place so he can get the loan he needs to reopen it. Eleanor Cook, a loan officer from the bank, shows up. After talking to Jesse, Eleanor believes that Jesse is unprepared because of the building not being up to code, so she turns Jesse down. Jesse tells her (as the inspirational music plays) that he is not a businessman or a "suit-and-tie" kind of guy (as he takes off the tie and unbuttons the top button of his shirt), but the Smash Club is a place that not only fell into his lap and not only did he grow up with it, but is also close to his heart and he does not want to see it die. His plan was to renovate it, fix it up, and get it ready to introduce a whole new generation to great music. He thinks that families and their kids deserve a place to hang out that is "much better than behind a kitchen door" (from which the family's eavesdropping in on and have been since the meeting began).

Later, Jesse calls the bank and talks Eleanor into giving him another chance to get the loan. This time, Jesse does his best to learn as much as he can about building codes, fire codes and safety codes. After the second interview with Eleanor, Jesse is successful, and she approves him for the loan, which means that he can reopen the Smash Club (much to the audience's applause). It turns out that Eleanor worked as a cage dancer named Ginger Snap at the club. And, like Jesse, she refuses to see the Smash Club get turned into a parking lot. She realizes that while he may not be code-smart, he is heart-smart because he put his heart into the Smash Club when he put his music into it (as stated above). She also agrees that he is not the "suit-and-tie" kind of guy and should just stick to his leather vest (which elicits a "WHOO!" from the audience). He knows her as Ginger Snap when she does her act in front of him (which elicits more audience approval).

After Eleanor leaves, the family bursts into the living room as recipients of Jesse's good news. D.J. decides that as soon as the Smash Club opens, she will be a waitress, with Joey adding some new comedy to rev and rile up the crowds. Becky decides there should be a karaoke night, Stephanie and Michelle want to help with decorations, and Danny decides thinks his singing talents should go well; so much so, he grabs an acoustic guitar and entertains the family with "Play That Funky Music". As they sing along with him, the rest of the family pitches in what they want to do and what part they will play in the club's success, as they head on upstairs to work on the preparations (and the audience applauds and the EP credits appear). 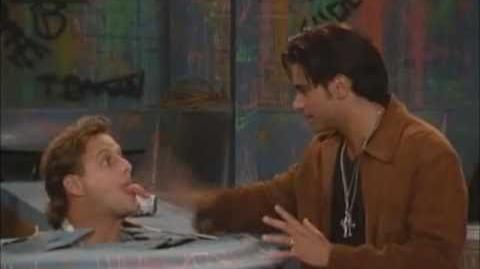 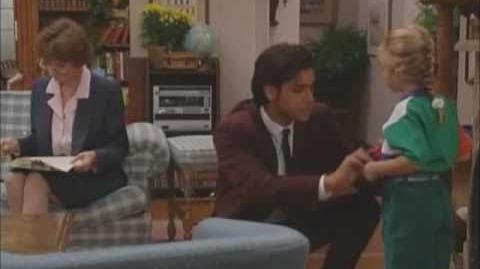 Full House Clip - Jesse finds the answers in a sandwich (by request)
Add a photo to this gallery
Retrieved from "https://fullhouse.fandom.com/wiki/Smash_Club:_The_Next_Generation?oldid=44433"
Community content is available under CC-BY-SA unless otherwise noted.