Start a Wiki
watch 01:40
Who is Steve Hale?
Do you like this video?

Steven Edwin Hale (DPM) is a character played by Scott Weinger. He begins appearing as a recurring role in season five; in seasons six and seven, he becomes a main character; and makes a special appearance in the series finale. Steve is D.J.'s high school boyfriend (until the end of season 7), and is usually the reason for the Tanners' empty refrigerator, if not for Kimmy. Explained by D.J., "Steve's a wrestler. He needs his strength." Steve is nice to the entire family. He returned in Fuller House, first as a recurring character in season one, then becoming a main character in season two.

Steve is the captain of his wrestling team and loves food. He visits the Tanners at breakfast time. He listens to grunge music and plays sports video games. He drives a 1986 Camaro. And he is also known as strong, trusting, even-tempered, vivacious, exuberant, heroic, adventurous, loving, efficient, strong-willed, thoughtful, educated, valiant, encouraging, hard-working, altruistic, loyal and erudite.

Steve Hale is D.J.'s first real relationship. Steve tells D.J. about his true feelings in the episode "Lovers and Other Tanners". They have their first "date" in the episode "Sisters in Crime", where they were supposed to watch a more adult movie, but instead, since Michelle and Stephanie were there, they went to a child movie instead. (However, the character's name is Steve Peters, so it's not clear whether it's the same person or not.) Steve and D.J. meet again when they are in a summer study program in Spain, and they become a couple while on the plane back home.

When the Tanner family went to Disney World, Steve is forced to remain behind. However, he misses her so much that Steve ends up visiting D.J. at Disney World in the episode "The House Meets the Mouse" (Part 2). This proves that he loves D.J. so much that he can't stand being apart from her, so that's a big stepping stone in their relationship.

In the episode "The Perfect Couple", Joey asks Steve and D.J. to be the dating couple in the game show he is hosting, The Perfect Couple. They agree, but D.J. soon starts to question saying yes. She worries about not knowing each other, which she is right about after they play the game show. Luckily, she feels better when Steve tells her that every time he learns something new about her is like opening a new present at Christmas.

Steve told D.J. about his being accepted to a college in Florida. He didn't understand why D.J. was sad about that, but the reason was that she was worried about what would happen to their relationship. In the episode "A Very Tanner Christmas", Steve gave her a sweater from that college, but that only made her more upset. In the end, he decided to stay with D.J. and go to a junior college to improve his grades.

When Steve is about to go to college, his relationship with D.J. slowly becomes weaker, resulting in their breakup in the episode "Love on the Rocks". On the series finale, "Michelle Rides Again (Part 2)", Steve makes a surprise visit to be D.J.'s date to her senior prom.

At first, Danny had doubts about letting D.J. date because of what happened to Kathy Santoni (a girl in D.J.'s grade who is having a baby). He later tells D.J. that she is a young woman now, she is in a serious relationship with a boy and he has his own apartment and wishes that if D.J.'s mom Pam was around, things would have been a lot easier. Luckily, Danny feels better when D.J. tells him that he is doing fine, and that he does not have to worry, because she is not like Kathy Santoni, and that there are a lot of things she wants to do and see before she gets married and has a family of her own.

Steve wrestles with Danny in the episode "Lovers and Other Tanners" so Danny could talk about D.J. and how she is suffering in some subjects and not paying attention to anything other than Steve, while Steve explains that his wrestling was inspired by D.J. Steve seems to care deeply about D.J.'s safety, and respects Danny a lot (which Danny seems to like). Steve, along with D.J.'s family, thought that Danny was sad about Vicky after his breakup with her in the episode "Is It True About Stephanie?".

Stephanie, like Danny, makes fun of how much Steve eats at their house.

Along with D.J., Steve is mad at Stephanie for breaking into his apartment in the episode "The Prying Game". Luckily, they both get over it in the end.

Steve finds Michelle adorable and sweet. In "The Heartbreak Kid", Steve lets Michelle be his valentine, and this leads to a crush. Michelle asks Steve if he would marry her. Steve, thinking that Michelle is playing, agreed. After the wedding, he was going to leave, but Michelle thought of the future, like honeymoons. Afterwards, he apologizes by buying some pizza for her (though he borrows the money from Danny).

In the episode "It Was a Dark and Stormy Night", Steve tells Michelle and her friends a scary story.

In the episode "The Last Dance", Steve is the one who tells Kimmy that D.J.'s grandpa, Papouli, passed away. (It is presumed that if he hadn't told Kimmy that, she would not have come over to D.J.'s house, and they would not have apologized to each other.)

Steve and Kimmy, as well as D.J., help Joey and Jesse with their radio show title in "Fast Friends".

Before dating D.J., Steve was in love with a girl named Rachel Taylor, who broke up with him. It is revealed that he could not eat for a week after the break-up. She is who D.J. and Steve run into when D.J. is picking out a prom dress. At the prom, Steve and Rachel are voted prom king and prom queen and have to dance together according to tradition. Steve tries to cut the dance short, as he wants to get back to D.J., but Rachel stops him by kissing him. D.J., who had been looking for Steve, catches them kissing and, in turn, kisses Rachel's date. Steve and D.J. have a fight, in which D.J. ends up crying. Steve consoles D.J. by saying, "I didn't know what love was until I met you."

After high school, Steve attended medical school and went on to become a podiatrist. He got married, but did not have any children, and has since divorced. At some point, he adopted one of Comet Jr.'s puppies and named her Comet Jr. Jr. She is the mother of Max Fuller's dog, Cosmo T.D. Fuller, and all three Golden Retrievers are descendants of the Tanners' original family dog, Comet.

In Fuller House, Steve is living in the San Francisco area, working as a podiatrist. In "Save the Dates" (1.12), Steve mentions that he was "Bay Area Podiatrist of the Year in 2012".

He is still in love with D.J. and ends up dating her again.

In season two, Steve dates a girl named C.J., who is oddly similar to D.J. In "New Kids in the House", he gets a new Pillow Person to replace the one D.J. lost at summer camp. In "Happy New Year Baby", he, with the help of D.J., proposes to C.J.

In season three, Steve and C.J. set a date and location for their wedding, which was about to happen at the end of the summer in Japan. He eventually breaks off that relationship and starts dating D.J. again. They go on their first date since high school in "Fullers in a Fog".

They date steadily in season four and Steve finally proposes at the end of the first half of season five in "A Modest Proposal".

Danny catches Steve kissing D.J. in "Lovers and Other Tanners" (1992) 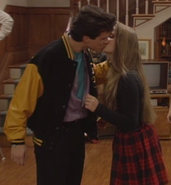 From "The Dating Game"

From "A Very Tanner Christmas"

From "It Was a Dark and Stormy Night"

Steve at the library

From "Support Your Local Parents"

Steve before his breakup with D.J. 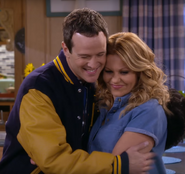 Retrieved from "https://fullhouse.fandom.com/wiki/Steve_Hale?oldid=48309"
Community content is available under CC-BY-SA unless otherwise noted.