The House Meets the Mouse (Part 2)

The House Meets the Mouse (Part 2) is episode twenty-four and the finale of season six of Full House. It originally aired on May 18, 1993.

In lieu of a teaser, we see Michelle surrounded by Winnie the Pooh, Tigger, and Goofy. She leads us into a recap of part one with a simple "Last week on Full House", followed by the truncated opening credits.

Continuing from part one, Michelle is dancing with a steel drum band. After the song is over, Snow White comes up and tells her that she heard that she had run away from her sisters. Michelle asks her to help her with her second wish.

As everyone else is searching for Michelle, those who do not know she is missing are doing their own thing. Jesse and Joey do their radio show, and it turns out that Joey is afraid of sharks, so he's reluctant to swim out of the tank with Jesse so they can get out of the aquarium.

Later, Becky is waiting for Jesse at the dock, and by this time, he is 45 minutes late.

Even while Michelle is having a tea party with Snow White and all her other favorite Disney characters (her second wish), she still wishes she had not wandered off, because now she misses her family. And right on cue, Danny, Vicky, D.J., Stephanie, and Kimmy show up, all led by Mickey (see Quotes and Trivia). D.J. speaks for all of them, saying they were all so worried about her and her safety. Danny explains to Michelle that she shouldn't have wandered off by herself, and that it was wrong for her to be so bossy, with Vicky adding that a good princess is fair and kind and that's what makes people like her. Heeding those words and taking that advice, Michelle makes it up to them by inviting them to her tea party, and they all accept.

Becky is fed up with waiting for Jesse, so she heads back to the hotel. He shows up at the dock, and she's not there. He then goes to the hotel where he plays a song for her on the piano and apologizes for being late. She accepts, and they go on the lagoon cruise.

While everyone else is enjoying Disney World's rides, an Aladdin-themed parade, and a stage re-enactment of Raiders of the Lost Ark (the latter two at Disney-MGM Studios/Hollywood Studios, where D.J. again mistakes Indiana Jones for Steve), Stephanie goes back to the hotel where Joey is because she's still furious at Michelle for cheating her out of a chance to become princess for the day. Steve shows up in Orlando to be with D.J., who is happy to see him. Joey talks to Stephanie (as the inspirational music plays) and tells her that he understands that she feels cheated because of Michelle, but she cheated herself out of a lot of fun by going back to the hotel while everyone else was enjoying the rides.

With Snow White's help, Michelle shows up. Feeling bad about cheating Stephanie, she surprises her with her third and final wish. It is that Stephanie gets to be the princess for the rest of the day, and Michelle hands the crown over to her. She even gets to ride on a parade float that was originally reserved for Michelle while she was Princess for the Day.

Because of the unselfish thing Michelle just did, the whole family can ride in the parade with her and Stephanie. Cinderella also rides on the float with them, with Stephanie dressed as her, and Michelle as Snow White, who also joins them on the float. Even Steve and D.J. get to ride on a float as well. That evening, Jesse's gig with the Rippers is a success as Joey broadcasts it live to KFLH. Jesse then performs the song "A Dream is a Wish Your Heart Makes", which he says is "for dreamers everywhere" as fireworks begin bursting behind the castle. Danny finally asks Vicky to marry him, and this time he is not interrupted, and she accepts the proposal. The fireworks display continues as the audience applauds (and the EP credits appear and then disappear as the camera continues to zoom out to reveal the whole castle).

The family meets up with Michelle and hug her.

D.J.: We were so worried about you.
Danny: Michelle, you know you're not supposed to wander off by yourself.
Michelle: But, Daddy, I was so mad.
Danny: Now, that's no excuse. We're gonna have a long talk about this later.
Michelle: But, Daddy, I'm the princess, and nobody would do what I told them.
Danny: Sounds like you were trying to be the boss.
Michelle: The princess is the boss.
Danny: Bruce Springsteen is "The Boss".
Vicky: Michelle, a good princess is fair and kind. That's what makes people love her.
Michelle: I'm sorry. You guys wanna come to my party?
Danny: [laughs] Oh, we'd love to. Thank you.

Joey: Hey, Stephanie, come on, you're missing the fun. Don't you want to watch Michelle ride in the parade?
Stephanie: Why did she have to cut in front of me in line? I should have been the princess. I'm sick of her always getting her own way!

Michelle: Hey Stephanie, I bet you can't guess what my third wish is.
Stephanie: Bet you you're right. But I'm sure it's something that will make you very happy.
Michelle: No, it's something that will make you very happy. [to Snow White] I wish my sister Stephanie could be the princess and ride in the parade.
Stephanie: Me? You mean it?
Michelle: I was thinking. You should've been the princess anyway.
Stephanie: Thanks, Michelle! But, really, I couldn't.
Michelle: Okay.
Stephanie: But if you insist. [Michelle gives the crown to Stephanie, who puts it on her head.]
Stephanie: It's beautiful! Wow! Thanks!
Snow White: I have a special surprise. Because Michelle was such an unselfish princess, your whole family can ride in the parade! 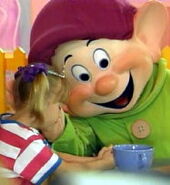